It was a chill Tuesday morning on the paintball field recently opened by Redrum Extreme Enterprises. Young scientists from the Natural Science Institute (Department of Genetics) had already begun the second hour of their three hour long team building exercise.

The field consisted of natural terrain (a dense growth of trees, plants, and underbrush covering a large area) and a 5 storey high skeleton of an unfinished building.

Andromeda was standing on the top of the building, near the edge looking at the forest through her binoculars. She was in contact with Woon, who was situated in the control room. Woon used to be a homicide detective, but he resigned to start his own security agency with Andromeda as his assistant.

“Talk to me And... what do you see?” Woon asked patiently.

“I was wondering... was it really necessary for the wooded part of the field to be four times bigger than Monaco, besides I can’t see anything from the leaves. We shouldn’t have let them go out there alone”, she sounded worried. “Is everything OK from where you’re watching?” Andromeda asked, pressing her earpiece.

“Um... one of the cameras on the ground level inside the building is repeatedly going on and off”.

“Well... nobody was supposed to be there, but I’ll go check anyway”, said Andromeda and hurried down the stairs.

On the inside, the building was recently decorated with graffiti and still wasn’t opened for paintball.

As she reached ground level, Andromeda slowed down her pace and started carefully approaching the section where the faulty camera was. As she turned around the corner she noticed it right away. David Preston, one of the participants, was laying on the ground, about 6 feet from the wall, face up, still holding his paintball gun. Andromeda hurried, hoping that she’ll be able to help him, but even from distance it looked like nothing can be done.

“Woon, call the security to round the 7 remaining participants up and come quick”, shouted Andromeda.

Next to the victim’s body was a huge puddle of blood with the murder weapon in it. His left hand was in his pocked and his right hand was still holding the paintball gun, as mentioned.

As Woon approached, his attention was immediately captured by the alphabet graffiti on the wall near the body.

“Look And... What do you make of this?” asked Woon alternately looking down on the ground and at the wall.

“Do you think that he was trying to tell us something?” Andromeda hesitated.

“I know he was trying to tell us something”, said Woon absolutely convinced. “But I still can’t figure out what”.

“Oh look... There’s something on Jim too”, Andromeda noticed. 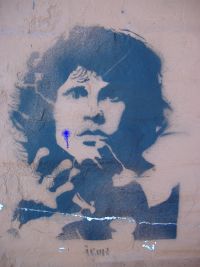 Woon walked towards the graffiti with a vivid interest. He’s mind was racing but he couldn’t figure out this one either.

Suddenly Woon started rummaging through his pockets. “Pfff... I forgot the list with the names”.

Without Woon telling her to do so, Andromeda rushed to the control room to bring the list, while Woon was still standing in front of the graffiti not knowing how to solve the mind boggling question - What was David trying to tell him?!

When Andromeda came back with the list, she found Woon leaned over the victim’s body.

“You checked his left pocket?” Andromeda was curious.

“I didn’t have to, I know what’s in it”, replied Woon as he was approaching Andromeda to take a look at the list. “Thanks And, I can always count on your swift return”, Woon couldn’t help but smile.

“Hey... I’m the muscle, your the brain”, said Andromeda handing over the list.

She noticed an instant spark in his eyes when he unfolded the paper.

“Well of course...” murmured Woon while looking at the list with the names on it.

Woon then went to the alphabet graffiti. Andromeda, standing next to him, started thinking out loud. “You know what’s funny... I read in the newspaper that paintball is safer than bowl...”

“That’s it... Hurrah! Andromeda, call the police! Oh... the poor guy didn’t stand a chance!” shouted out Woon in one breath interrupting her thought.

“Wha... ah... “, Andromeda was confused. “OK I’ll just stay here... with the body...” she added needlessly, since Woon was already out of her sight and couldn’t hear her anymore.

Andromeda called the police and then took another long look at both of the graffiti and remained puzzled. She just couldn’t figure out what was Woon so excited about.

67 answers to this question